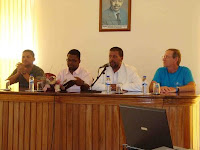 We're hoping that the workshop will be the catalyst that will really get things moving here in Cabo Verde. We would particularly like to see more enforcement of the law and some prosecutions for killing or harming or disturbing turtles. The laws cover a wide range of activities, from eating turtle meat to having brightly lit ocean front properties to driving quads on beaches, so far there has been one case heard in Sal in 2008. Unfortunately the two men caught red-handed with a female loggerhead in their car claimed that they didn't know they weren't allowed to eat turtle! Verdict? Not guilty. In terms of division of the grant that was applied for, it was agreed that the majority (€25,000) would go to Boa Vista to enable more beaches to be patrolled since the need there was the greatest. A small grant of €2000 was made for equipment for Maio and another small sum €3000 to be spent on training on Maio and Sao Nicolau. Although this doesn't seem like a lot of money to do such a big job, the Marine Turtle Conservation Fund are committed to helping long term and the amount granted in 2009 is likely to be considerably more.
Posted by Jacquie Cozens at 7:59 AM No comments:

The first conference for the newly formed Capeverdian Sea Turtle Network opened today with funding from the MCTF (US Govt sea turtle fund). The idea for the formation of this group is to promote better coordination and communication. Yesterday the main applicants for the grant met and today there will be delgates from all the municipalities and the department of environment who will share their plans for the coming season. Although there are many areas that need attention everyone is agreed that the preventing the killing of nesting females has to be the key priority.
Posted by Jacquie Cozens at 6:46 AM No comments: 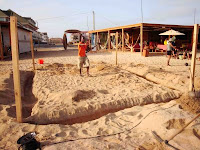 Have been busy this weekend building two hatcheries. Our main hatchery will be in the same place outside the Riu Hotel and the second, smaller one, is close on Surf Beach (near Sab Sab). We need a second hatchery to give us a better success rate with nests 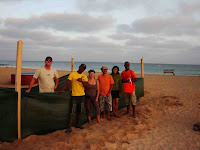 moved from the east coast and particularly from Serra Negra, where a high number were lost due to flooding. Shortening transportation time is always a good idea. It may seem like a busy place to put a hatchery, but it is one of the most secure spots and does not have high tides like other beaches in Santa Maria. In addition, we wanted to increase the number of residents and visitors that get a chance to see conservation in action.
Posted by Jacquie Cozens at 2:17 PM No comments: 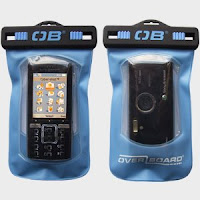 Went diving with Joel who's the co-owner of Overboard who make all kinds of products to keep your gear dry and sand free. Joel and Dan are sponsoring us this year and have kindly donated all the bags we need to keep GPS's, notebooks and tagging equipment safe on the beaches. Appropriately, two turtles (both loggerheads) graced us with their presence! http://www.over-board.co.uk
Posted by Jacquie Cozens at 4:13 PM No comments: 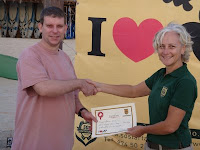 Andy Thomas from St Ives SAC (British dive club) visited the hatchery and handed us a cheque for £850. The money was raised by holding a ball in the summer. Andy & Elise, who have an apartment on Boa Vista, also adopted a baby turtle during their stay. That amount of money makes a huge difference to our project, so thanks a lot to everyone at the club, hope you have a great dive season.
Posted by Jacquie Cozens at 7:35 AM No comments:

Just received news of a grant from PADI's Project Aware which will help us begin to record in-water sightings. With the money received we will be producing posters and turtle identification charts. Project Aware is funded by donations from divers.
Posted by Jacquie Cozens at 4:16 PM No comments: