Anti-breakwater petition dismissed as irrelevant by The Resort Group.

To say that our views and the views of The Resort Group (TRG) are different is somewhat of an understatement!  But trying to find some middle ground where we can work together to protect the environment and ensure the economic development of the country is very important.  With this in mind, we had a very lively and interesting discussion with TRG's representative, Victor Fidalgo about turtle conservation in general and the controversial breakwater proposal in particular.

There is no question that the tourism development of Algodoeiro on the west coast of Sal has had a serious impact on loggerhead turtles but in the last couple of years TRG has implemented some mitigation measures such as installing red filters in the beach bar and, in 2012, made a small donation to our general fund.  However, naturally, as a for-profit enterprise, TRG's objectives are primarily financial gain.

Additionally, Mr Fidalgo as the previous the President of Cabo Verde Investimentos, ("the government investment promotion agency and export, whose purpose is the promotion of conditions conducive to the realization of projects of national and foreign investment, the promotion of the Cape Verde Islands as a tourist destination and the promotion of exports of goods and services of Cape Verdean origin.") is most concerned about economic development and not preservation of nature.  Both and he & TRG strongly believe that it is absolutely necessary for the development of Sal as a tourist destination to have an enclosed swimming area on the west coast.

It saddened us to hear Sr Fidalgo say he believes that Cabo Verde is not unique.  He believes that sunshine and beaches are available anywhere and he looks to the Canary Islands as a development model, stating "if only we could develop in this way and receive 2 million visitors a year" - failing to also recognise the negative aspects of this style of development (high rise and high density).  It's not hard to find information about the mistakes that were made there.

We believe the opposite - we believe that there are many factors that make Cabo Verde unique - not least of all the unspoilt nature, the beaches, the sunshine and very importantly, the turtles.  It is somewhat ironic that the photograph featured on TRG's website is a view of a sandy beach, the sea and limitless horizon - not a beach that features a concrete breakwater!  This is selling one idea while creating a different reality.

Our vision for the development of tourism in Cabo Verde is clearly a long way from the vision of TRG.  Mr Fidalgo told us that he admired the type of tourism in Florida where visitors can view dolphins and turtles in aquariums and that this could be a great opportunity for us.  Naturally we disagree and believe that the opportunity to see nesting turtles in their natural habitat is what visitors here are interested in.  We think that the tide is turning against captive animals being kept for human entertainment.  Suprisingly Mr Fidalgo told us that he believed the breakwater would actually improve the beach for turtles since the amount of sand would be increased.

This the kind of misleading statement that may end up deciding the fate of Algodoeiro.  The reality is that the consultants who made the environmental impact assessment on behalf of TRG made several serious errors regarding turtles nesting here.  They made these errors because they did not even do the most basic research or contact us directly for scientific data.  The errors include:
- that this beach is insignificant for turtle nesting
- that turtles will not exit a beach when there are rocks on the shoreline at low tide
- misinterpreting a map showing monitoring points as a map showing nesting areas

(More information about these technical errors can be read here.)

On the subject of the petition to stop the breakwater from being built, Mr Fidalgo was extremely dismissive stating that it meant nothing and that he could find 10,000 people to sign a petition to say that they wanted they breakwater!  In addition, he considers that the opinion of almost 5,000 people was irrelevant and should be ignored by the government.  Again we disagree.  The purpose of a public consultation period is so that the voice of the people can be heard and it is an obligation of the decision makers to listen.  Sadly Mr Fidalgo would not accept a copy of the petition from us.
One of the most troubling aspects of our conversation was that the protest that has been mounted against the breakwater is seen by Mr Fidalgo as another obstacle that the Capeverdean people must overcome - a comparison with famine and other hardships was made.  To us, this is a strange analogy, since the 'obstacle' is not an obstacle at all - but Capeverdean people defending Sal's nature & beaches from being destroyed.

It's a sad situation when 4,800 people who are fighting to save Cabo Verde's natural heritage are painted as working against the country & its residents.

Although we agree that the needs of the people are paramount and that anything that can be done to alleviate poverty and improve the standard of living in Cabo Verde should be done, we don't agree that it should cause the loss of some of the country's prime assets - unspoilt nature and beautiful beaches.  We don't agree with Mr Fidalgo's statement that this breakwater will increase the prosperity of the people of Sal - it doesn't create more jobs and we are not sure that it will attract more people.  "Come to Cape Verde - you can swim in the seas on an artificially created beach, surrounded by concrete walls" doesn't sound like a great advertisement to us!

Nevertheless, in conclusion, if the breakwater does go ahead, Mr Fidalgo told us that they understand there will be some disruption and they will do their best to mitigate some of the negative impacts that might be caused.

Now and again fishermen bring us turtles that have been caught in their nets.  The situation did not look too good for this Olive Ridley. 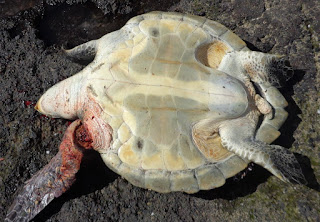 One of her flippers was hanging by a thread and the other had deep wounds.  The story had a happy ending though.  You can see photos of her surgery, rehabilitation and release on our facebook page.  Just click here.

We couldn't have done it without the support of Cabo Verde Diving who provided a safe place in their rinse tank and then took her out on their boat.
Posted by Jacquie Cozens at 10:52 AM No comments:

Read all about the incredible and challenging 2012 season.  The year was very successful and the project made good progress, but, there are of course, always more challenges on the horizon. 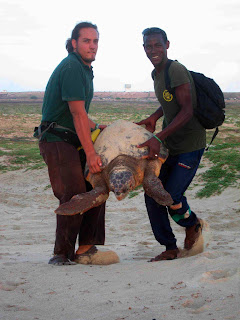 We would like to thank you for supporting turtle conservation and the preservation of Cabo Verde's natural heritage during last year and also take this opportunity to wish you all a very good 2013.

Should you have any comments, questions or suggestions you are very welcome to send us an email.

Em português Relatório 2012 SOS Tartarugas
Posted by Jacquie Cozens at 10:15 AM No comments:

Even though we have no nesting turtles right now, we had a fun & interesting morning with a group of students from the USA.

The students had visited several islands and had taken part in activities that contributed to Capeverdean society or the environment. 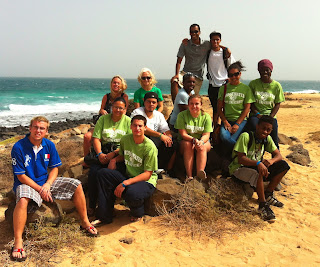 Following a presentation about marine turtles in Cabo Verde and the work of SOS Tartarugas, the students visited two of Sal's major nesting beaches.  On Costa Fragata they saw the natural, undeveloped coastline that is part of the Protected Areas system and then saw the contrast with the developed beach of Algodoeiro.

The students, two of whom had families originating in Cabo Verde, were all very interested in conservation issued presented by the development of Sal and many stated an interest in volunteering in future years.

The trip was organised by The Home of Happy Wanderers,  a long established children's home in Boston.  The home has an excellent programme called Academic Support for College and Life which helps young people make the transition to university life and independent living.

SOS Tartarugas was very proud to have met & hopefully inspired these young people. 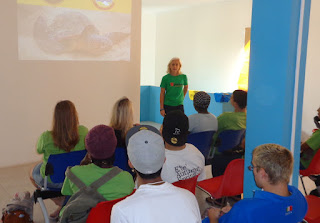 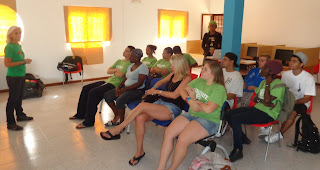 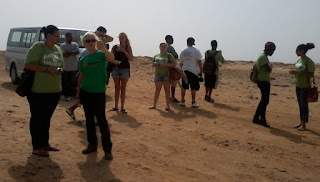 Thanks to Centro Psicossocial de Santa Maria for hosting the presentation.
Posted by Jacquie Cozens at 10:57 AM No comments: