One of the Wonders of the Atlantic

Cabo Verde's turtles are ranked fourth in the 7 Wonders of the Atlantic.

http://aeiou.expresso.pt/as_sete_maravilhas_do_atlantico=f505885
Posted by Jacquie Cozens at 11:19 AM No comments:

Linking with other islands

Just back from visiting Fogo & Brava (and a stop in Santiago in between). On bot 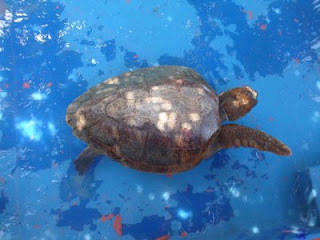 h islands the town hall (Camara Municipal) are interested in protecting turtles and beaches and have already have some activities. Of course, the main problem, as always, is lack of resources, so we hope to be able to support them both in some small way this summer. As far as we can tell onl 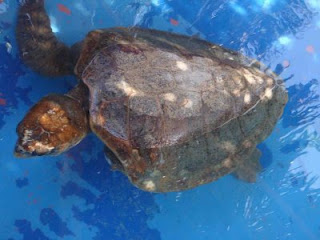 y anecdotal evidence exists regarding the number of turtles nesting on these two islands (which only have a few black sand beaches) so a starting point would be a census. There are two uninhabited islands close by (Ilheus do Rombo) which are 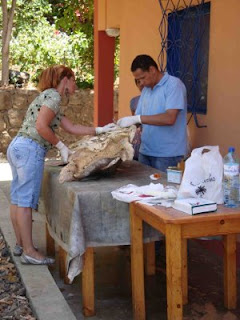 rumoured to have many turtles, these islands are protected but it is well known that fishermen visit them illegally to take adults as they nest. While we there we stayed at Tortuga B&B where the owner, Roberto, was caring for an adult male loggerhead. This turtle, named Victor, had been tangled up in a fishing net that had caused the loss of one of his flippers and made some deep cuts around his neck. Amazingly enough the fisherman who found him wanted to save him rather than eat him! During the time we were there a vet from Sao Vicente accompanied by Sonia Merino from INDP (Fisheries Dept) came to perform a small operation to remove a spur of bone which it is thought might have caused him trouble or become infected. Unfortunately Victor is in fairly poor condition, having lost a lot of weight, but we feel hopeful that he will make a full recovery when he is eventually returned to the sea.
Posted by Jacquie Cozens at 10:18 AM No comments: