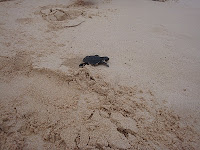 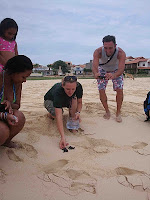 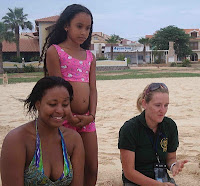 Thanks to Lacey from Blu Bar and her niece these hatchlings were safely returned to the sea in Santa Maria yesterday.  The little turtles were found wandering around in  Pedra da Lume.  The little girl was happy to see them go in the sea and will receive an adoption certificate to commemorate the occasion.
Posted by Jacquie Cozens at 3:21 PM 1 comment: 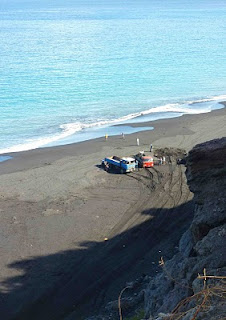 One of our colleagues, Silvana Roque, who heads up the turtle conservation project on Fogo, has been forced to admit defeat on one of the main turtle nesting beaches.

Sadly, the President of the Camara Municipal has authorised sand extraction and forty lorries a day are reported to visit the beach every day to destroy this vital habitat.  This is, of course,  against the law.   The President has also chosen to publicly attack the work done by Project Vito and to post guards on the beach to prevent turtles coming ashore.

In the face of this opposition, Silvana has decided to direct her attention to the other beaches on Fogo.  It seems that no one in government or law enforcement is prepared to stop this gross and immoral breach of the law, including the Minister for the Environment who was recently in Fogo.
Posted by Jacquie Cozens at 9:47 AM No comments:

It's always an anxious wait during the days the first hatchery nest is due to hatch.  Did we do it right?  Is the sand ok?  Will we get any babies?!!

The nest started to dip in the middle (indicating movement below) some days ago but each night our checks revealed no little heads poking through, until finally on Wednesday at 21h just as the Rangers arrived at the hatchery the sand trembled and forty seven babies burst on to the surface.

The nest had incubated for 60 days which is average for the start of the season and the little turtles were released shortly after in front of our guests on the turtle walk on Algodoiero - an unexpected bonus for them! 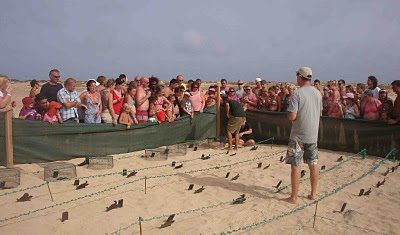 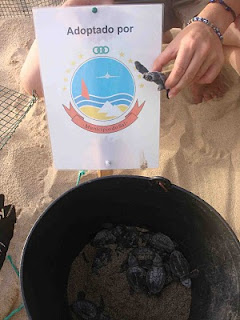 The next day, in front of a full house, Neal explained our work while Hattie and Ben opened the nest to see what remained.  Luckily for everyone there, a further 13 hatchlings were still in the nest, giving a total of 60 turtles from 77 eggs (78% which is a great result).

The nest was previously adopted by the Camara Municipal do Sal.

The next nest is due in a few days.

To see hatchlings, adopt turtles, book walks or meet the Rangers visit the hatchery outside the RIU beach between 16h and 18h every day.
Posted by Jacquie Cozens at 10:26 AM No comments:

Data so far shows decrease in turtles killed on Sal 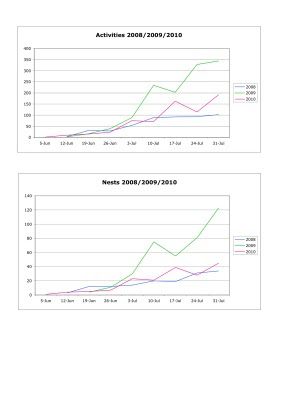 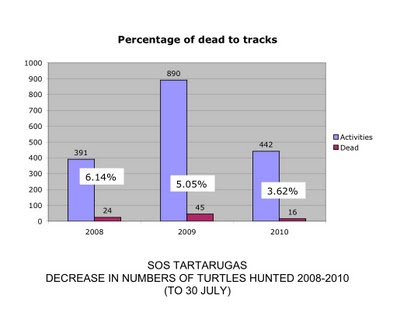 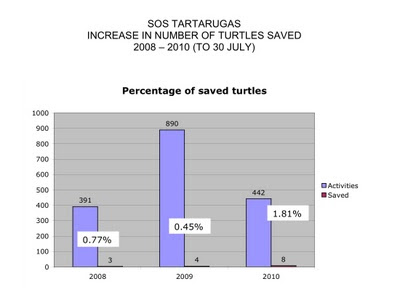 The latest figures for June and July show that 2010 is slightly busier than 2008 but much lower than 2009.  However great progress has been made in decreasing the mortality of turtles and increasing the number of saved turtles.
Posted by Jacquie Cozens at 10:28 AM 1 comment:

A new scientific paper published about our work 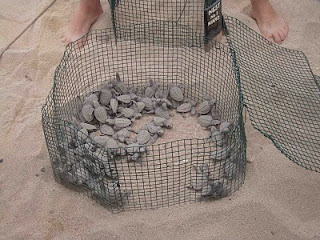 The first two nests of the year have hatched.  Nest 1 in Surf Beach Hatchery began hatching on the 5th August 57 days after it was laid (average incubation period) and had a stunning success of 92%.  Congratulations to Tim at Rhooms who is now the proud Dad of 109 baby loggerhead turtles!

The second nest hatched last night with (so far) 46 hatchlings born at 11pm.  The lucky people on the turtle walk on Costa Fragata were able to see them go into the sea at the end of their tour. 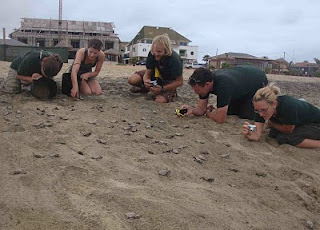 Excavation of the nest will take place at 17h this afternoon for those on Sal who would like to see some hatchlings.
Posted by Jacquie Cozens at 11:39 AM No comments: