SOS Tartarugas delivered toys and presents to kids in hospital at Christmas.

Most people who know me know that I'm not great with any of the three things in the title!  I understand dogs better than kids (sorry!), I hate germs and sickness & can't look at blood and Christmas makes me run and hide!!

Nevertheless we were happy to help NGO Agir pelo Sal (Action for Sal) to deliver toys and clothes to the children and babies in hospital on Sal on Christmas Eve.

The toys were kindly donated by Mike Morgan and friends in Wales Morgan Office UK.

Thanks to all who contributed, the kids were thrilled!
Posted by Jacquie Cozens at 10:22 AM 1 comment: 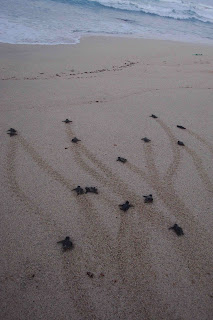 One of the last nests on Costa Fragata hatched yesterday evening and by chance we were there to see it.  At around 17.20 when we got to the nest we saw six little heads poking out of the sand and within 20 minutes there were 73 frisky hatchlings racing for the sea.  I guess they came out a little bit early as it was so overcast and cool.  An amazing treat, it's really rare to be in the right place at the right time.

So Costa Fragata is almost finished, but still lots more turtles waiting to be born on Serra Negra!
Posted by Jacquie Cozens at 9:03 AM 1 comment:

The strangest turtle ever? 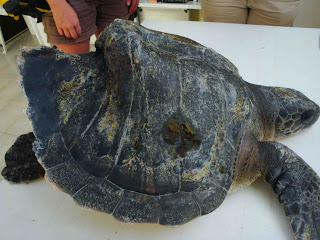 This oddly deformed turtle was given to us a few days ago after it was seen floating around just off Santa Maria.  It had lost two of its flippers, possibly in a shark attack and clearly could no longer swim.  The malformations included a really a shorterned, heart-shaped carapace which curved upwards at the edge, particularly at the rear and a large hump in the middle.

The veterinarian who examined the turtle suggested that the main cause was a calcium deficiency which may have been due to poor nutrition. 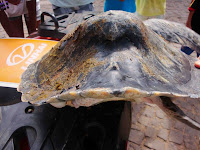 In Cabo Verde many people keep turtles at home, often in sweet water rather than salt and feed them an inappropriate diet.  A lack of sunlight and being kept in a small container would also be a contributing factor.  It is possible that this turtle became a victim of this practice. 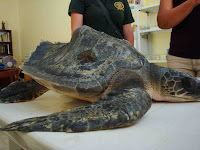 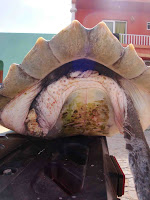 Unfortunately its injuries were too severe for it to survive.


For more photos please follow this link
Posted by Jacquie Cozens at 12:35 AM No comments: