A big week for turtles

As the annual Taola (Capeverdean Sea Turtle Network) meeting in Praia gets underway, news also reached us about the first nest of the 2012 season.

It was laid in Ervatão a beach in Boa Vista on the 25th May.  Although nests in May are not completely unheard of, it is pretty early.  We weren't really expecting to see any tracks until the second week of June!

So we have quickly got ourselves organised and started day time patrols to look for tracks and on Thursday the main hatchery will be built.  Usually we would have some Rangers here already to help but in all three previous years the turtles haven't turned up until after we have been patrolling for what seems like weeks!  Naturally the year we decide to start working a little later, the turtles get here earlier!

The first Rangers arrive at the end of the this week, so we should soon be up and running.
Posted by Jacquie Cozens at 1:09 PM 1 comment:

a) Take a look at the map of Sal and decide which beach you think the first turtle track will be seen by SOS Tartarugas.  Remember the letter.  (Click map to enlarge)
b) Decide which day you think it will be seen.  Remember the date.  (Hint: Unlikely to be before June 1st and if it is after June 21st there are going to be some very bored SOS Rangers by then!)
c) Email or post here your beach letter and date.
d) Donate €2 to the cause
e) Collect your prize which consists of a brand new SOS cotton bag and the honour of adopting the very first nest in the hatchery in 2011.

PS You have to get the date and beach correct to win and judge's decision is final! 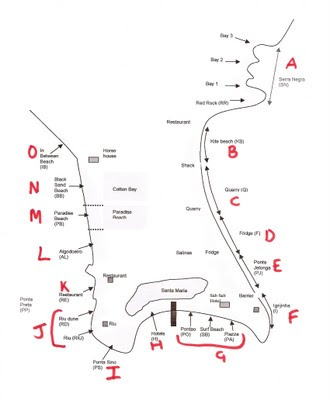 Posted by Jacquie Cozens at 9:44 AM 2 comments:

Big shout out to the beach cleaning team!

Thanks to everyone who supported this initiative.  We cleaned a huge section of Kite Beach thanks to a small but dedicated bunch of people. 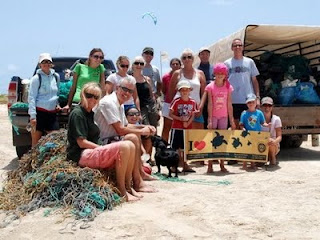 Well done to Linda, Peter, Neal, Marta, Francesco, Debora, Nicoletta, Vickey, Patricia (we can see you at the back), Liz, Sean, Ariane, Kirk and finally the Salter family. 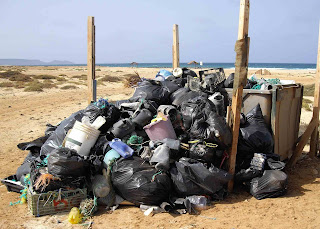 You can see lots more photos by clicking on this link.
Posted by Jacquie Cozens at 8:39 AM 2 comments:

Conservation can benefit communities as well as the target species and one of the aims of SOS Tartarugas is to demonstrate how this can happen. Ultimately the aim is for communities to protect their own marine resources including turtles and to reap the benefits that this might bring.

After three years of concentrating on direct protection of nesting turtles the project enters a new phase, focusing to how to engage the community in conservation activities.

The first step was to try to understand the barriers to people caring and becoming involved in conservation and so INDP were commissioned to undertake a study which involved discussions with fishing communities, businesses & the general population here on Sal.

Thankfully the majority of people were aware that it was against the law to harm or disturb turtles, but most did not see any benefit to participating in their protection although they recognised that this was an important thing to do.  They simply did not see it as anything to do with them.
Changing this perception is going to be a long-term project and the first steps will be to begin a pilot scheme with one of our coastal communities to demonstrate that protecting turtles and the environment is worthwhile for so many reasons.

The full report can be downloaded here in Portuguese and here in English.
Posted by Jacquie Cozens at 8:16 AM No comments:

Fishermen to be paid to collect plastic?

This story is of real interest to us all since any removal of plastic from the sea has to be a good thing, but a few things in the reports caught my eye:

The BBC reports that one of the aims is to give fishermen a financial boost (some of them have already been collecting plastic for no reward).  Paul Trebilcock, chief executive of the Cornwall's fish producers organisation says that as custodians of the sea the fishermen were happy to do this for nothing.  Unfortunately if fishermen were truly custodians of the sea, the fisheries industry would not be in such a bad way.

Imagine using beef farmers as an analogy - each year they kill all of their livestock to maximise the monetary gain, allowing so few of the cattle to reproduce that in a few years all the cattle are gone.

Then imagine that not only have the beef farmers killed all the cows, during the course of their work, they also indiscriminately killed all the sheep and pigs and chickens that they encountered (these were not eaten, they were disposed of since they were not the target species).

Pretty soon, nothing left at all in the fields, no beef, chicken or pork in the supermarket, farmers asking for more subsidies and protection and blaming the government for poor management and then finally, to make up for the food shortage, breeding really random species (let your imagination run wild!) and relabeling it so that an unsuspecting public think they are still eating the meat products they can't do without.

Pretty daft isn't it?  But that is the sad state of our seas and fisheries now.

The second paragraph that really stands out is from the Guardian report:

"The move is intended as a sweetener to fishermen who have bitterly opposed the European commission's plans to ban the wasteful practice of discarding edible fish at sea. Fleets fear they will lose money by not being able to throw away lower-value catch."

So you can see that despite 'being custodians of the sea' they still back the incredible waste of a huge proportion of what they catch.

Coincidentally our first beach clean of the season will be on Sunday 15th starting at 9am on Kite Beach, Costa Fragata.  Bring your own rubbish bags, drinks and lunch.  email info @ sostartarugas.org for more information.
Posted by Jacquie Cozens at 2:23 PM No comments:

Prompted by the opening of the new all-inclusive RIU on Boa Vista, Radiotelevisão Caboverdiana reports on the unseen problems caused by tourism development.

This includes the sudden unemployment of as many as 500 migrant workers who now swell the growing barracas (slums) in Sal Rei.

You can see the full report here:
RTC report on problems caused by tourism development
Posted by Jacquie Cozens at 8:34 AM No comments:

Build your own rubbish bin on Earth Day

One of the biggest hazards to marine turtles is rubbish, so what better way to teach children about the environment and turtles than to make them think about what they do with their rubbish.

Escola Nova in Espargos, the capital of Sal had a problem with disposing of rubbish in the classrooms because of the lack of bins, so SOS organised a competition to get the kids to design and make their own bins using recycled materials. 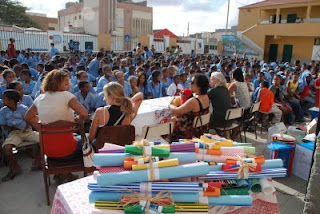 A ceremony was held on Friday with judges from SOS Tartarugas, the Delegation for Education and the Peace Corps with the winners receiving a map of the world and some art & craft materials.

Only three grades were involved but this still meant 600 children!  Each bin had an environmental message written on it and a representative from each class came forward and described the materials used for their bins and explained the message.  The bins all showed a great level of creativity and imagination and choosing three winners was very difficult. 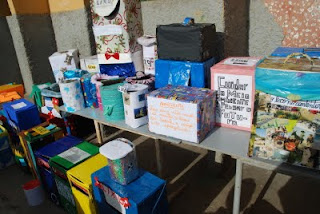 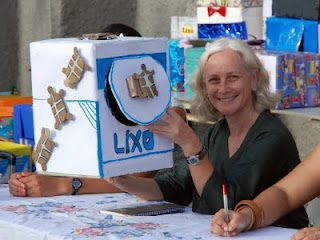 In the end the judges chose three bins based on the creative use of materials, while of course our favourites were those that incorporated turtles in the design!
Posted by Jacquie Cozens at 8:37 AM No comments: