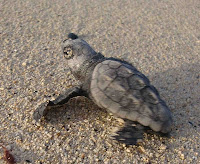 I am really happy about the number of turtles that hatched, the success rate of 94% is brilliant. Thank you very much for sending me the photos that you took of the baby turtles, I especially liked the one of the turtles heading towards the sea. I am going to print them and take them in to school to show my friends.

Me and my Mam and Dad think that you and your team are doing a great job in helping the baby turtles. 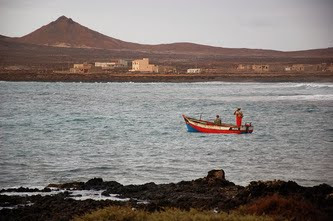 SOS congratulates our colleagues on this action and wish them every success!
Amigos do Calhau
Posted by Jacquie Cozens at 12:43 PM No comments:

Yesterday was a great day if you like baby turtles!  During an afternoon patrol on the beach we found two hatched nests.  One still had 43 turtles inside, all of them trapped by a big rock in the middle of the nest.

The second one had also hatched the previous night and a surfer called Clovis had found 12 babies at the back of the beach, all were dead from dehydration and exhaustion.  Tracing their tracks back, he had opened the nest and found another 35 inside and he immediately put them in the sea.  There were 25 unaccounted for and it was clear that none of them had gone the right way, but instead had followed the bright lights of Santa Maria and in particular the new residential zone of Antonio de Sousa.

Meanwhile at the main hatchery, a nest exploded with 50 babies during evening while there were still plenty of people around to watch.

At this time of year we have afternoon patrols to mark and find nests - you can clearly see when a nest has hatched as there will be a mass of little tracks - hopefully going towards the sea.  Anyone can join on these patrols, just send an email on info@turtlesos.org if you would like to help.
Posted by Jacquie Cozens at 9:13 AM No comments: