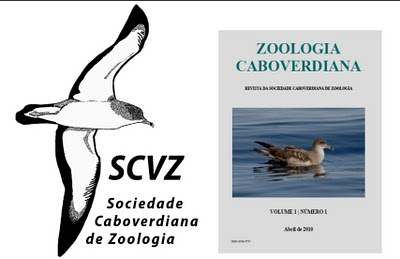 Founder Cornelis J. Hazevoet says "The aim of the organisation is to promote zoological research in Cape Verde. One of the means through which this is aimed to achieve is the publication of a scientific, peer-reviewed journal - Zoologia
Caboverdiana."

SOS will be participating in this great initiative by submitting an article for the next edition, due in October 2010.
Posted by Jacquie Cozens at 8:49 AM No comments: 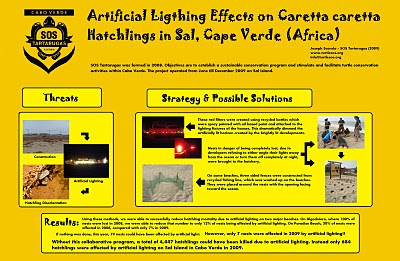 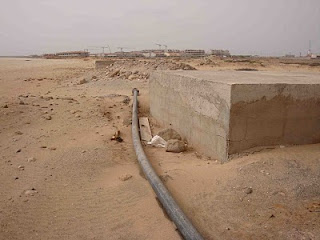 Visited Algodoeiro yesterday for the first time since I returned to Sal last month.  It made my heart sink to see the  construction going on.  In 2007, the first year I was here, we saw turtles laying nests right at the back of this beach.  Now, with the exception of a few meters of beach at the front, an area that is easily flooded, the beach is so degraded and compacted it would be impossible for a turtle to dig.  The fences, ditches, lumps of concrete and construction lights will be a death trap for hatchlings later in the year

In 2008 there were 61 nests laid on this section of beach - 17.6% of all nests on Sal.  In 2009 the percentage dropped to an astonishingly low 5%.  A decrease in nesting activity of 12.6% in only 12 months.  While development might not be the only reason, it is the most obvious contributing factor.

Increases in habitation is a double edged sword - on the one hand it will probably signal the cessation of hunting of turtles in the area, since there is too much risk of being caught, while on the other hand, it will cause more disturbance on the beach with lighting and people, not to mention beach furniture and beach umbrellas limiting the usable area.

Developers can mitigate the effects if they have the will - a few simple steps such as not building too close to the high water mark, turtle friendly lighting and educating residents and guests all help.  For our part I envisage a lot more work, every nest in this area will need to be moved this season as the risk of hatchlings becoming disorientated is too great.

In the meantime nesting season is upon us and we have open ditches just waiting for unsuspecting turtles.
Posted by Jacquie Cozens at 10:49 AM No comments:

Frangle is a German organisation that encourages travellers to help projects and organisations by volunteering or taking equipment or other donations with them.

As Frangle says "if you are taking a trip and have a little space in your backpack, you can support people in the country you are visiting while making new friends and experiencing the culture in a completely new way."

Google translation of link
Posted by Jacquie Cozens at 9:28 AM No comments:

As I was reading about India's decision to cease tourism in tiger sanctuaries it made me stop and think about whether our own turtle tourism programme was a good thing or a bad thing.  The article quoted instances of tigers being 'hounded' by tour buses using satellite telemetry and hotels preventing them moving through their territory.

Our own tourism programme is very small by comparison, sixteen people a night on two different beaches and we rely on this to fund our protection work.  From the outset, our view was that the only way to stop people killing turtles on Sal was to deter hunting and the best way to do this in the short term is to have people on the beaches watching what is going on.  There is no doubt that taking guests (which includes groups of local residents, returning emigrants, politicians and school children) to watch nesting is an important part of this strategy and it has a strong role in educating people regarding the imminent extinction of loggerheads in this country.

The problems come when poor practices start to creep in.  There have always been local tour guides taking guests to the beach at night during the season, but sadly, the majority are not well informed and do not adhere to international turtle watching guidelines.  We have seen tour guides with large groups (20+), allowing their guests to use flash photography, walk on top of nests and even sit on the turtle for a photograph.  One tour guide regularly turns the turtles upside down so guests can get a good look at her.  Another abandoned a turtle to hunters without calling either SOS Rangers or the police (fortunately we were in time to save her).  We do not want to prevent others taking guests to the beach, but we urgently need regulations and a licensing system to prevent things getting out of hand. 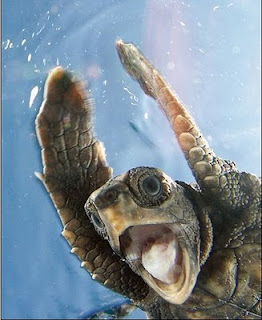 A recently written report (Nesting activity of Caretta caretta and Beach Surveillance on Sal Island - Silvia P. P. Lino) states that the decline in mortality of nesting loggerheads on Sal

In the meantime we love this photo from Nat Geo's photos of the year.

Posted by Jacquie Cozens at 7:39 AM No comments: