Not many people could have imagined that in a few short years the movement to protect Cabo Verde's precious marine turtles would have grown so rapidly.

It is fantastic to see more and more people spreading the word and when groups rise spontaneously from the community - even better.

This new group "Caretta - Grupo de Protecção das Tartarugas em Santa Cruz" will be conducting patrols to protect the turtles when they are nesting as well as educational activities.  Santa Cruz is a small town on the west coast of Santiago island - the island where, unfortunately, the most turtle meat is eaten.

They have already featured on national television releasing a green turtle that had been kept in an irrigation tank. 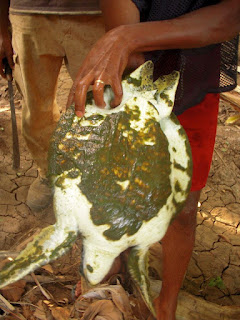 The television footage features our very own Alecson 'Fredy' Cardoso who completed his training on Sal with SOS Tartarugas in 2011.  You are making us proud Fredy!

You can see more photos here Outru Resgate di um Tartaruga Verde.  What great work - the water is filthy and the poor turtle is covered in algae.

Posted by Jacquie Cozens at 8:36 AM No comments:

Kids claim the first turtles of the season!

We might not have any turtles nesting yet, but that hasn't stopped the rush to adopt nests and hatchlings in our hatchery in Santa Maria.

The hatchery is there to increase the chance of survival of nests that are in danger, those dangers include light pollution (hatchlings will go towards the bright light, not the sea), predation by dogs, destruction by quad bikes driving on the beach or being laid too close to the sea.

Building the hatchery always creates a lot of interest, but British holiday maker, Harrison was particularly keen to be the first to adopt a turtle.  Neal told him to come down to the beach at 10am the next day but Simon, Harrison's dad said that he was up extra early and down on the beach by 9am, eagerly awaiting the arrival of the Rangers and running to meet the car as they drove up!  Harrison is now the proud parent of the first turtle to be born in the hatchery in 2012 and he chose to call that turtle "Andrew".

Not long behind Harrison, the first nest was adopted via email by Abigail & Yasmin Kumar.  The Kumar family visited Sal in 2010 and saw the work being done by SOS Tartarugas.  Dad Ben, says "I'm a keen environmentalist and I want to bring up my kids in the same way."  This will be the third year that the Kumars have supported our project.  The girls are obviously big turtle fans and are pictured here in Mexico where they had the chance to swim with green turtles. 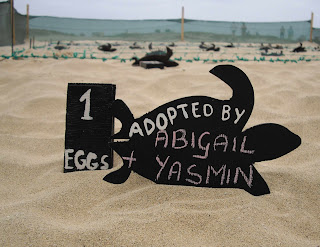 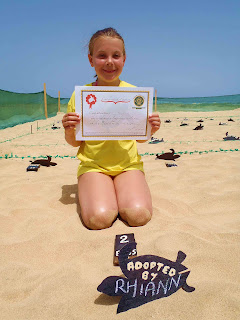 Nest Number Two was adopted by another British holiday maker, Rhiann.  Rhiann was delighted to be able to go into the hatchery and visit her nest while her proud parents took some photos.

Congratulations to all you environmentalists of the future and thanks for helping us to look after the turtles in Cabo Verde!

To adopt a hatchling or nest on the internet just click on this link or send an email to info@sostartarugas.org
Posted by Jacquie Cozens at 7:12 AM 2 comments:

War is declared on plastic bags on Sal, Cape Verde!

SOS Tartarugas joins the war on plastic bags!  We are proud to have formed a partnership with the Capeverdean NGO, ADAD (read more about ADAD here) who have started a project, funded in part by PRCM, to reduce the amount of plastic bags used in Cape Verde.  Plastic bags are a blight on our landscape here on these beautiful islands, hundreds of them can be seen in the road, on trees, stuck against fences and worst of all, floating around in the sea.

Unfortunately there is very little awareness of the problem amongst the population as well as shop owners and plastic bags are given away for every single small purchase.

The answer?  Make cotton bags readily available and sensitise shop owners and shoppers to the problem.  Eventually a tax may be imposed or even a ban may be made on importing plastic bags into Sal.  The City Hall of Sal have also become partners of the project and the mayor recalled a time when bread was collected in cloth bags, not plastic.

"According to the mayor, plastic represents some 11% of all domestic trash produced on Sal. “The worst part is that some of this trash does not end up in the dump. It goes into the sea, into barren plots of land. We have veritable Christmas trees of plastic bags. And that’s where the problem lies. Even the plastic that goes to the dump ends up being bad for the environment, because, as we know, plastic is made out of petroleum and takes 400 years to decompose in nature. Until then, it continues to produce heavy metals that destroy and poison the soil, producing toxic fumes.”  (Read the news report from A Semana here).

SOS participated in ADAD's activities to celebrated Environmental Day with music, prizes and a display of traditionally made bags produced by artisans on different islands.  The materials used included rice sacks, paper & cotton.  Read about the launch of this project here. 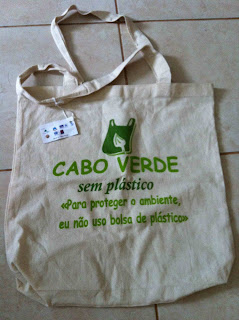 Television report of the event.

Here on Sal these great cotton bags will be produced by RA-AMAO (Associação das Mulheres da África Ocidental)
a women's association  and SOS have already ordered the first 100.  We will be selling the bags for no-profit to residents and for a small profit to tourists so that we can fund the next production run.  It is fantastic to be able to support an enterprise based on Sal.
Posted by Jacquie Cozens at 5:44 AM No comments: 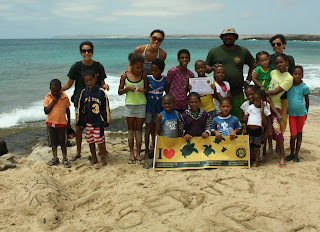 In celebration of International Children's Day SOS Tartarugas organised a fun competition for kids.  The event was held in Pedra de Lume on Sal as part of the ICCA's (Capeverdean Institute for Children & Adolescents) Children's Fair on June 1st.  ICCA have a whole month of activities planned for children.

The kids showed a fantastic knowledge of turtles during the competition and the sculptures were excellent. 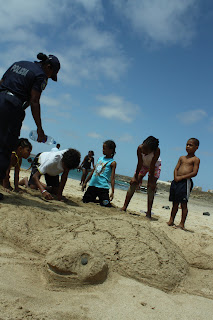 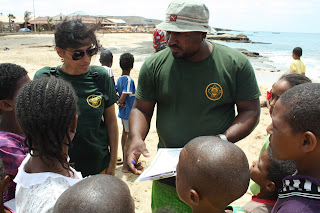 They included a lot of small details such as the right number of scutes on the shell and egg chambers with eggs inside!
Posted by Jacquie Cozens at 10:47 AM No comments: