Not such a good result 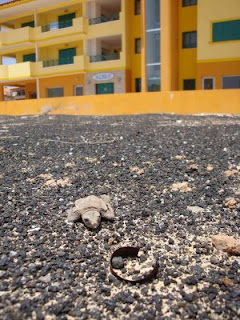 Last night a nest hatched on the beach by the new residential area in Santa Maria. Unfortun 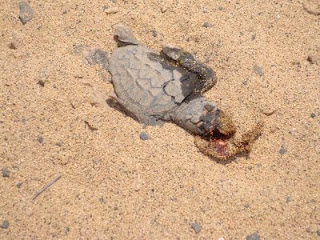 ately almost all 65 babies headed for the buildings, many of which are very brightly lit, even though they are unoccupied. Several were also killed on the road. I am personally very upset as we searched and searched for the nest back in July and even though the turtle had made eight attempts to dig a nest, we believed that she had given up. It's a very rocky area and everyone told us turtles no longer nest there. If we had found the nest it would have hatched safely in the

hatchery. What is even more upsetting is that the residents and developers I have spoken to do not feel that their lights are a problem. Turtle friendly lights are just as good as regular lights and we believe that people buying property on Sal would want the turtles to keep coming to beaches near their houses. We feel even more determined now to rescue nests in areas like these until we can convince people to make some compromises to help the turtles.
Posted by Jacquie Cozens at 4:48 PM