It started slowly, with just one lone hatchling emerging from Nest 2 on the 21st August, 59 days after the nest was laid on Black Sand Beach (at the northern end of 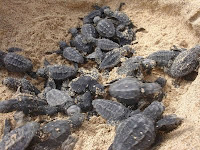 Algodoeiro on the west coast). This was quickly followed by Nest 1 and then oddly, Nest 50. In the end, Nest 1 produced 58 hatchlings and Nest 2, 79. Nest 2 was exceptional as we had 100% success - 79 hatchlings from 79 eggs! A rare thing in both hatchery and nests left on the beach. Nest 50 is interesting as well as the eggs were recovered from a nest on the Riu dune that had been uncovered by the very high tide. No one had any idea about the hatch date as we did not know exactly when the nest was laid. So far we have had 34 hatchlings from that nest.
Posted by Jacquie Cozens at 6:05 AM