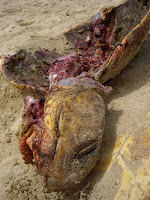 Unfortunately all this rain has impacted the turtles as well. For various reasons our friends in the military have not been on the beaches for around ten days and it seems that the hunters are well aware of this. This week we have lost one turtle in Serra Negra and one the night before last on Costa Fragata, a stone's throw from Santa Maria. On Saturday night when João was with a group of guests out for turtle walk near Paradise Beach he found tell tale drag mark which told him there was a turtle about to be killed. Sure enough, the hunters were there with the turtle and claimed that it was their turtle and they were entitled to kill it and João as well if he interfered. Standing his ground João (and his group who bravely stayed as well) the turtle was saved and returned to the sea. She was named Suerte (Luck) and happily she nested two nights later in the same area. Not so lucky for the other two. However much we patrol we cannot be everywhere at once and when a turtle is killed there is a great sense of loss in our group and also a feeling of responsibility.
Posted by Jacquie Cozens at 7:22 AM