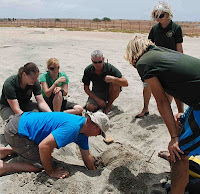 We are delighted to announce that Hattie and Neal found the first nest of the season on Algodoeiro, the west coast of Sal on the morning of the 10th June.  The nest had been laid on the perimeter of the Paradise Beach development around 5m from the sea.  It was quite a tricky one to find and as you can see it took plenty of Rangers to get the job done!  In the end Neal got lucky and found the above average clutch of 118 eggs.  Due to concerns about the possibility of lights disorientating the hatchlings when they are born, the nest was moved to the hatchery at Praia Antonio de Sousa (Surf Beach) in Santa Maria.  For new Ranger Sandra Parsons it was her first experience of seeing a turtle track and relocating a nest.  The turtle arrived on the beach a full nine days earlier than last year, possibly due to higher temperatures.  We are now patrolling all the beaches eagerly awaiting the next turtle.
Posted by Jacquie Cozens at 7:05 AM