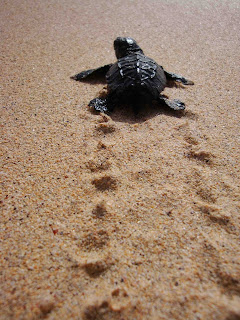 One day around four weeks ago some guests at the RIU hotel were walking on the beach and found one or two turtle eggs.  Looking around they realised that due to an exceptionally large swell there was an entire nest about to be swept into the sea.  Rushing up to the hotel they were given a black plastic bin bag and they quickly put the eggs inside and handed them to the receptionist.  Unfortunately that's where they stayed all day!

Around 4pm the brother of a driver that we work with somehow obtained this unlikely package and around 5pm he brought them down to us at the hatchery.

Looking inside Neal didn't hold out much hope for them.

Several weeks in the sand, washed over by waves, inexpertly bundled into a black plastic bin bag, sitting on the floor in an air-conditioned room all day.... could any hatchlings really be born after this? 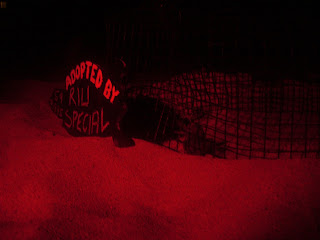 Well, we'll try anything!  So the team put them into the hatchery and we all stopped worrying about them.

12 nights later and none of us can believe it - a solitary hatchling was born.  We waited impatiently another day, nobody daring to hope more would be born - but we were wrong!  The following night another 24 were born!

We estimate that this nest of 59 eggs was laid by the turtle on the 13 August and spent 40 days on the beach before being relocated.

Later that night on 5 October 2010, 25 miracle baby turtles were released into the sea in front of a cheering group of guests and Rangers.
Posted by Jacquie Cozens at 12:21 PM