Sadly it's not only the turtles that face extinction in Cape Verde. 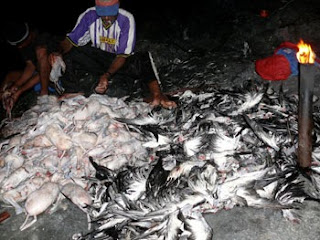 The Cape Verde shearwater (calonectris edwardsii, known here as the cagarra) also faces a severe threat from hunting.  The birds are killed for food just before they are ready to leave the nest.

Even after awareness campaigns and other activities hunting of the fledglings continue, as José Melo says "it is causing the extinction of a species that only exists in Cape Verde, 70% of them on Raso islet and also near Rombo islet, next to Brava.  It doesn’t exist anywhere else in the world.”

Posted by Jacquie Cozens at 9:57 AM