At this time of year, Week 15 of our nesting season, we are all thankful that the activity starts to die down a little, there are less hunters on the beach and we don't need to work as hard.  Naturally we also have a smaller team than we would do at the peak of the season.

Not this year though!  We have the decreased number of Rangers that we usually have but the amount of turtle tracks and nests has risen this week, not declined! 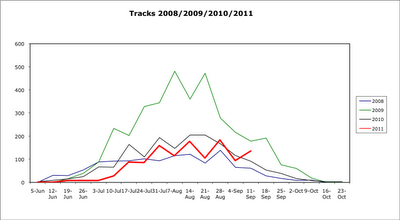 As you can see by the graph above, in every other year by the 18 September the line is going down.    The red line, whic shows 2011 is going UP instead - we had almost a 50% increase in tracks this week compared to last.

On top of that, during the last week, we have also seen lots of untagged turtles.  Normally we would expect to be seeing the same turtles that we have seen all season and have therefore already tagged.

Just goes to show that no amount of planning will ever prepare us for what the turtles have in store!
Posted by Jacquie Cozens at 6:30 AM