Say goodbye to turtles on the west coast of Sal?

After an incredible night on Serra Negra on Saturday with 9 turtles followed by Sunday with 11 turtles we had a quick look at the data to see if this unusual amount of activity was replicated on Sal's other beaches. 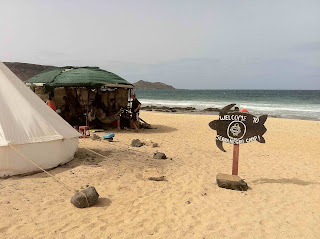 Sadly, the answer was no, in fact the west coast of Algodoeioro, the area with all the new resorts had barely one track over the two nights.  Turtles choose dark beaches and despite the willingness of the resorts to make some small changes to improve the situation, it may be a case of too little too late.  The RIU hotel is a fine example of low impact development, it is set back from the water and has no exterior lighting visible from the beach.  Unfortunately the same cannot be said further up the coast as planning permission was given for lit walkways, street lighting & exterior lights very close to the high water mark.
The sharp decline in nesting in this area is immediately obvious from the graph below.  Although we will have to wait for the end of the season before knowing the final percentage of nests, it can be seen that Algodoeiro has gone from 32.9% of nests to a paltry 13.82%. 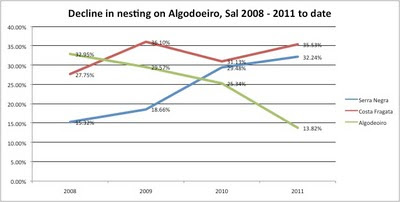 Serra Negra is the one area on Sal that suffers hardly any light pollution (although the glow from Santa Maria is starting to intrude) and so an unusual number of turtles are being forced to forgo their usual beach and head there. 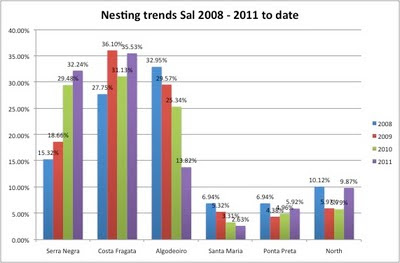 No problem?  Not really, because Serra Negra is a very small and narrow beach with problems of innundation and flooding - it is not really suitable for the density of nests we are seeing there now.
Posted by Jacquie Cozens at 7:10 AM