Hattie (Serra Negra 9pm-1am) : "OMG what a night.... JC & I decided to do a short patrol on SN.  On our way over we saw lights, not a good thing, then when we arrived we saw a truck, really not a good thing.  JC & I walked quickly towards poacher heaven, Bay 3.  When we got there we found a few more people than we were expecting - around eight people sitting in the cave with a lot of supplies and cooler boxes, really set up for the night.  Sat there for a while then watched from the top of the cliff.  See another guy on Bay 2 and decide to go back to Bay 1 to get phone reception and call for back up.  Hear all about the two flipped turtles on Algodoeiro and call Neal to deal with that.  Rush back to Bay 3 and find two of the hunters calmly watching a nesting turtle.  Talk quietly to them to explain what we are doing when we tag her and try to get them to name her, no go, so Jacquie names her 'Double-date. ' Drunk guy starts tickling my feet - very not cool, move away.  He then starts throwing sand everywhere trying to help the turtle to cover up, then when she stops he follows her down pointing at the sea and shouting "go, go, go"!!!  You would expect that to be the end of the story, but no, he comes back up the beach, lies on her nest and fills in her body pit.  He looked like a huge turtle, so funny.  Ben and Pilar arrive and take over drunk-watch.  Apparently Francesco and the police came but they didn't find us, so obviously they left even though the quad was there and the truck " 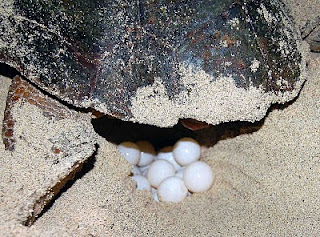 Pilar (Serra Negra 1am-6am) : "My first patrol.  Al the interesting stuff happened at the beginning of the night when Ben woke me up three hours earlier than expected and told me there was an emergency at SN.  After waiting for the police and talking with some guys who explained to us what turtle eggs tasted like, we finally went alone.  The night consisted of walking, sitting, walking... we saw nothing, literally nothing, the sky was full of clouds and I found it hard to recognise my feet."
Nerissa (Walking Algodoeiro with tourists) : "An action packed night which at present is still continuing to unfold.  Saw three dodgy looking characters, one was walking around at the back.  Janice and Chris went to investigate and found a flipped turtle (still intact and very much alive).  We tagged, flipped her over and got her back to the sea.  As we were leaving Neal phoned and said there was a second flipped turtle near us.  A very happy group of tourists who were very helpful and supportive of our actions."
James (Algodoiero 9pm - 6am) : Well... a very interesting night, I am very tired so I will just stick to the facts.  Heard that Nerissa had an upside down turtle, helped her and then Victor said he heard bottles rattling.  Went to check it out and there she was, a turtle underneath a large sheet.  We untangled her, flipped her over and sent her on her way.  Three men near the left soon after we arrived.
Carolyne (Costa Fragata 1am-6am) : Reached Fridge and found turtle tracks up but not down.  Stef explained everything, tagged the turtle and we walked her back to the sea.  More tracks on Ponta Jelonga and messy tracks and lots of footprints.  Stef followed the track to find an upside down turtle.  She hadn't been harmed but was obviously in some distress.  Stef tagged her, we turned her over and watched her go back to the sea... v. slowly & in the wrong direction, at least the long way round!!!
Hattie (Morning patrol 6am - 9am) : Very tired.  After only two hours sleep I was woken at 5am by Stef, another upside down turtle .... seriously??  No luck getting hold of anyone at the police.  Rubbish!  Told Stef to just tag her and flip her back and put her back in the sea.  Ben and Pilar arrive safely back from Serra Negra, no more drama.  End of long night but what a fantastic success!!!
Posted by Jacquie Cozens at 12:23 PM