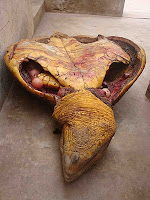 8.30am Phone rings, the police have a turtle in the station.  Fly out the door thinking it's a live turtle that has been recovered - no such luck - it's the remains of a turtle, everything but the meat which is already on it's way to be sold.  The night before, our Rangers alerted the military on the beach that there was a turtle taken on Costa Fragata, the military called the police and together they found the culprits.  Unfortunately it was too late for the turtle.  Once again we are required to take photos for evidence and to our dismay we see that one of them is a guy called Gongon, who was caught, fined and released only a couple of weeks ago.  So the entire system works except the judiciary who are giving paltry fines and sending the criminals straight back out with a suspended sentence.  Surely now, they will go to jail? 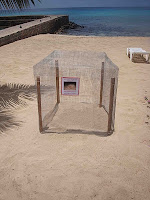 10am A call from the Camara Municipal - someone has reported that a turtle nest has appeared on the beach in front of Porto Antigo - it has a huge cage around it - was it something to do with us and should it have been left there?  Go round to see it and the mystery grows - it's nothing to do with us - how did it get there?  The Camara Municipal ask me to call the police since interference with a nesting turtle or the eggs is a crime unless you are authorised, but I ask for some time to find out the full story.

11am A third call, this time from Neptunus (yellow sub), they have a turtle, can we come right away.  Get down to the pier and climb aboard.  They have a female loggerhead turtle - she is obviously very sick with bulging eyes and abnormally yellow skin.  She was found floating around Ponta Sino, unable to dive down and clearly exhausted.  She needs to be assessed and given some time to rest.  Formulate a plan and the whole team swings into action.  Neal goes down to ask Josh Angulo if we can use their small pool, we are very happy that he agrees.  Someone else calls Fatima, our wonderful vet, who is always ready to help us.  Odessia (watersports company by the pier) kindly suggest the use of their quad and trailer to bring her to the road and Tony, a pick up driver is waiting to drive her to the far end of Santa Maria.  Meanwhile, Hattie, Chris & Carolyne are having all kinds of difficulties.  A man called Mingos will not allow any of our team near the turtle, shouting and screaming 'I know what you do, I know all about your project. this is my land, this is my turtle' etc etc.  By this time there are hordes of people surrounding the poor turtle.  The outcome?  Hattie is pushed out of the way and the turtle is returned to the sea to who knows what fate.  It had been explained to Mingos that the turtle was sick and needed help, but Mingos was determined to create a problem and stirred up a mini riot that we were powerless to prevent.  The only upside?  After thinks had calmed down, we found a few more sympathetic Capeverdian men who want to help.