Lucky escape for a turtle in Santiago 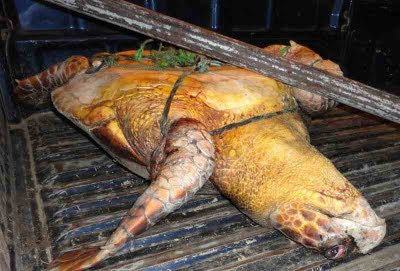 What a great story this is.  A turtle was being carried off to be killed but the hunters were seen by the police.  Thankfully she was saved and was returned to the sea earlier today, exhausted but able to swim to safety.

It's the first time I have heard of such an intervention in Santiago and would love to think that the Nha Terra campaign workshops for the authorities contributed in some small part to this rescue.

Turtle About To Die Saved by Police

It was really a close call for this sea turtle which escaped from ending up in a pan. Apparently a group of fishermen took the turtle from Gamboa beach and by chance were seen by a police van on the street. The incident occurred at around 23:00 yesterday, June 22.

The turtle was being carried by a group of fishermen who came from Gamboa beach but seeing the the National Police truck  they dropped the animal in the road near the roundabout in San Antonio and ran away.

National Police colleagues contacted the Marine Police who soon arrived at the scene.  The injured turtle was placed on the back of the van and was returned to the sea today.   According to a source an animal of this size could be sold for around €300.

This incident comes at a time when there is an awareness campaign for the population of Santiago on the consumption of turtles. An initiative of the National Protection of Sea Turtles in Cape Verde (TAOLA), in partnership with the Directorate General for Environment (DGA).

According to the DGA, Santiago is the island where there is the most consumption of meat.
Posted by Jacquie Cozens at 2:44 PM